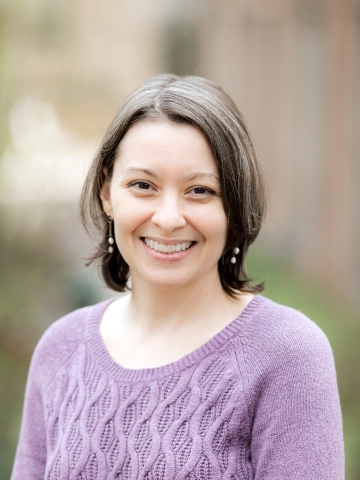 JoEllen earned her PhD in Physics from the University of North Carolina at Chapel Hill. Her research focused on galaxies that live close to each other and how that affected their ability to create stars. After graduating, JoEllen worked as an AAAS Mass Media Fellow at Voice of America in Washington D.C. and an adjunct faculty member in the physics department at West Chester University. She was an Assistant Editor for Outpatient Surgery Magazine and an Astronomy Subject Matter Expert for Cengage.

While at UNC, JoEllen was active in graduate student government, including holding positions as treasurer and secretary and successfully advocating on issues related to graduate student well-being. She also gave birth to her first child, Carina, during her sixth year of graduate school and finished her degree remotely in 2016. She comes to the Grad Center from Penn Medicine Development and Alumni Relations, where she served as a Communications and Stewardship Writer. As the Associate Director of the Graduate Student Center, JoEllen manages the Navigating the Academy programs and the Center’s publicity and communications.

JoEllen is passionate about science communication and remains active in the science community through her advocacy work, serving as Advocacy Director of the 500 Women Scientists Philly Pod, a past member of the AAS Committee on the Status of Women in Astronomy, and the chair of the Education Committee at the American Helicopter Museum in West Chester. She also raises her two daughters, Carina and Alessa, with her partner Ed, and the help of her parents, brother, and two kitties, Thelma and Louise. JoEllen has recently made it her personal mission to abolish her lawn in Downingtown and turn it into a productive garden that includes native plants.

Request a meeting with Jo